Where are the Eyes is a program for detecting and mapping surveillance cameras. Users mark cameras on their phone as they walk past them, and build a shared global map of surveillance.

Our hope is that Where are the Eyes will be widely adopted and used to help activists in two ways: to increase awareness of surveillance and authoritarian practices, and to plan activist movements. 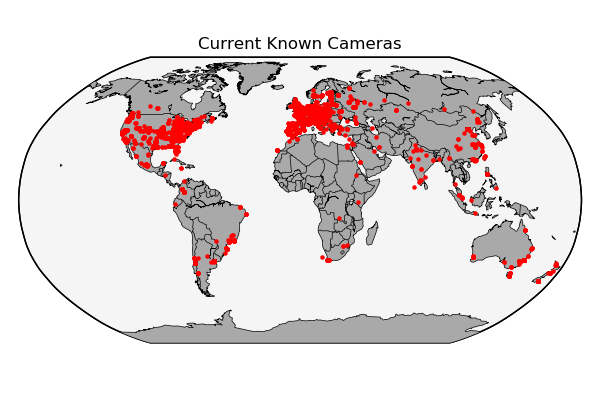 The State of Where are the Eyes

Someone recently wrote asking what happened to Where are the Eyes, and whether the project should be considered abandoned. We’re long overdue for a public update about the state of the project.

Yes, Where are the Eyes has been mothballed. I’m still alive and have kept the server up and running so that the app still functions, but I’ve moved on to other projects and am no longer maintaining or adding features to the iOS or Android WhereAreTheEyes apps. Some reasoning below.

What were the problems with Where are the Eyes?

Consumer location accuracy is low, especially on foot next to buildings, especially on cheaper Android devices. Therefore, the precision of camera locations on the map varies widely, from accurate-to-the-meter to an-entire-street-off. This means Where are the Eyes works great as a social statement, “hey, look how many cameras are around you all the time!” but doesn’t work for more fine-tuned purposes like “navigate a path from point A to point B while avoiding as much surveillance as possible.” This could be fixed with some UI for letting the user select where to put the camera near them on the map, but it’s a fair bit of work to implement, and a lot of work to make that user experience elegant and natural to use. Also, we would have needed to implement the navigation system entirely by ourselves, which was way out of scope for this project.

The user base for Where are the Eyes has always been small, limiting the project’s impact. I love this project, and have gotten a lot of great feedback about it over the years. To really maximize its impact though, the data should be integrated into larger projects with more users. The obvious choice is adding our camera data into OpenStreetMap. Unfortunately, the OpenStreetMap team was very resistant to the idea. They want all data to be submitted to OSM directly by users, so each WhereAreTheEyes user would need an OSM account, and the WhereAreTheEyes app would add the camera data to OSM on their behalf. They would not allow us to submit the camera data from the Eyes server using a single OSM account for the project. This means every user would have to de-anonymize themselves and have their OSM username associated with every camera they’ve marked - an idea that’s unappealing to many counter-surveillance people.

Given the above two concerns, it felt like the project had hit a wall. We could work on smaller features (bug fixes, a heatmap of camera density, some gamification of camera-marking), but nothing that would fundamentally address the two big limitations of the tool.

Are there any plans for reviving Where are the Eyes development or combining it with other efforts?

No plans for revival. The data is all public if it can be used for a good cause. For a while the people behind Ghost Me, a similar project, expressed interest in inheriting this infrastructure to help jump-start some of their work, but it never came to fruition.

What would it take to continue development?

At this point if you wanted to write a next release of Where are the Eyes you’d be best off taking the general structure and writing a new app largely from scratch. The Android APIs have grown and changed a ton since 2017, making this code beyond antiquated. Apple doesn’t even recommend writing apps in Objective-C anymore, and it could be re-implemented better in Swift. It was never great code to begin with: I started working on Where are the Eyes when I was a Sophomore in college, and I was learning mobile app development as I went. Someone more experienced could do a much better job.

A New Decade of Countersurveillance

Hello world! Where are the Eyes is still chugging along in 2020!

Thanks for sticking with us all this time.

While it is not clear whether Amazon’s infrastructure is deployed at the Mexican border family separation sites, it is being used to aid the agency. Amazon employees are protesting internally, and wrote a collective letter to CEO Jeff Bezos demanding an end to Amazon’s ICE contract:

This will be another powerful tool for the surveillance state, and ultimately serve to harm the most marginalized

Additional coverage by CNN, The Washington Post, and The New York Times.